My name is Brandy. In July of 2007 I had gastric bypass surgery at my heaviest weight of 367 pounds. I had high blood pressure and high cholesterol. I also live with an auto-immune disorder that had caused my kidneys to fail. I started dialysis in 2005 and did not qualify for a transplant because I was too heavy. 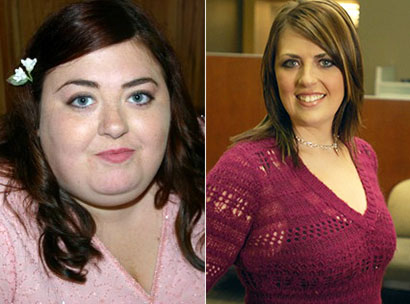 I have struggled with my weight for as long as I can remember. I hit 200 pounds when I was in middle school. I was an active child playing basketball and volleyball, but I could never control my weight.

When I turned 20, I decided to change the direction of my life. I got a new job and started dieting. I was successful at losing 30 pounds by exercising 3 days a week.

In 2003, I moved from California to Tennessee. I was new in town with no friends and stopped exercising. I quickly gained the 30 pounds back and started to feel really tired and run-down all the time. I thought that it was just me being lazy, but then things got worse. I was short of breath all the time and my doctors thought I had asthma. I thought this was just part of being overweight.

One night I went to sleep and woke up the next morning with my lungs hemorrhaging. I was sent to the emergency room and I found out after a week of being in the hospital that I had an auto-immune disorder called Wegeners Granulmatosis. I was put on a lot of medications and fell into a deep depression. Through the next several years I was in and out of the hospital. I ended up gaining close to 100 pounds, skyrocketing to 350 pounds.

I came to the Vanderbilt Center for Surgical Weight Loss in the summer of 2006. I met with the dietitian and started the process of getting insurance approval. In order to meet my insurance company requirements I had to complete a six month doctor supervised diet. Also, I had to get clearance for the surgery from all of my medical specialists.

In July 2007 I had the laparoscopic Roux-en-Y gastric bypass surgery. It was the best decision I have ever made for myself. When I left the hospital I had already lost 7 pounds. I was excited about the future that had just opened up for me. I was excited for each of my follow-up appointments so I could see my progress. At my one month check up I had already lost 50 pounds. I started working out after six weeks post-op.

At three months I had lost 100 pounds and I was feeling great, but I started to plateau. That's when I found a love for riding bikes and hiking. I would ride on the weekends for 15-20 miles at a time. By increasing my exercise and continuing to eat healthy I was able to lose 160 pounds at six months post-op, putting me at 220 pounds. I was enjoying working out so much that I continued with my regimen and hit my new goal weight of 175 pounds in 2009.

I am currently listed on the National Organ Transplant Wait List and I am looking forward to the day I get that call.

I can honestly say that my decision to have the gastric bypass surgery at Vanderbilt was one of the best things I could have ever done for myself and for my future.