Jennie's hair was falling out. Her vision was failing. Her blood pressure and cholesterol were out of control. Her sleep apnea left her exhausted. She had diabetes. She needed a walker to get around.

Jennie first came to Vanderbilt in 2007 because of her diabetes. At an appointment in the Diabetes Clinic, her doctor told her that if she didn't do something about her weight, she would likely not live longer than 10 more years. 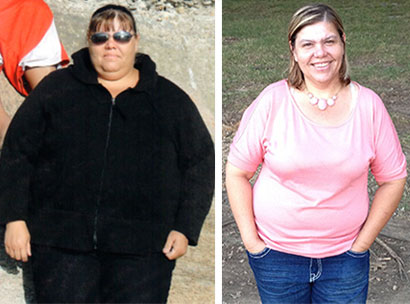 The scale read more than 300 pounds, but she couldn't bring herself to consider weight loss surgery.

"I didn't want to give up food," said Jennie, who lives just outside of Nashville. "I had it in my head that if I had the surgery I wouldn't be able to eat again. It took a while for me to get to a point where I was ready."

A support group for our Surgical Weight Loss Program was what made the difference. These groups are offered for past, present and future patients; anyone who needs support at any point during their efforts to achieve a healthy weight.

Jennie came to a support group for about a year, listening to others stories and asking questions. Finally, after months of essentially living in a recliner and needing her children's help to get up, she took action.

"I finally saw that there was a better life on the other side and it wasn't about just having to give up the things you love," she said. "I know the support I had from my family, wanting me to live better, was my main push. And if I hadn't gone to those support groups, I probably wouldn't have gone through with the surgery."

It only took three weeks for her to get surgery scheduled, and she had a roux-en-y gastric bypass in April 2011.

Getting used to her new life took time, but her fears about always being hungry dissolved, and her energy returned. Now, she needs no prescription medicines and can enjoy life to the fullest.

"It's an amazing feeling to have energy again and not focus your life around food," said Jennie. "I walk and ride my bike; I go out to the lake; I'm always on the go now."

Now, Jennie volunteers as a support group leader for the Surgical Weight Loss Program. She has helped start several new support groups around Middle Tennessee and enjoys meeting new people who are struggling with the same problems she did.

"I'm there because it changed my life and I want other people to know it's possible," she said. "We talk about clothing, skin, how to eat, everything. I started a clothing closet, too, because people lose weight so fast that they can't afford to buy new clothes."

My surgeon saved my life, she said. "That's why I volunteer my time. I could never give back enough for what they've done for me."