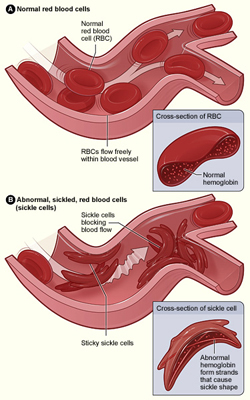 Sickle cells live a short time, causing a shortage of red blood cells, or anemia. When sickle cells travel through small blood vessels, they can get stuck and clog the blood flow. This causes pain episodes, called a sickle cell pain crisis, often in the arms, legs, chest, back, or abdomen. Constant sickling also causes blood vessel damage and injuries to the organs in the body.

This is a very common complication of sickle cell disease. Normal red blood cells live 120 days in the blood stream, but sickle red blood cells last only 7-14 days. This means there are not enough healthy red blood cells to carry oxygen throughout the body. When this happens, a person might have the following symptoms:

Blood transfusions can be used to treat a sudden worsening of anemia resulting from infection or enlargement of the spleen. The medication hydroxyurea is used to treat chronic anemia due to sickle cell disease.

When sickle cells block flow blood flow in the lungs, usually when there is also a lung infection, this can cause chest pain, fluid build up in the chest, and insufficient oxygen delivered to the body. This is called acute chest syndrome, which is treated by antibiotics, giving extra oxygen through a mask, blood transfusion, and pain medication. Hydroxyurea can reduce the frequency and severity of acute chest syndrome.

Damaged blood vessels in the brain increases the chances for sickle cells to block flow. When brains cells do not get enough oxygen, they may die, causing some parts of the body not to work normally. This is called a stroke. Patients who suffer a stroke are treated with scheduled, long-term blood transfusions to prevent another stroke. A test called Transcranial Doppler Ultrasound (TCD) measures the velocity of blood flow in the large arteries in the brain and identifies children who are at increased risk for stroke. Chronic blood transfusion program or hydroxyurea therapy is offered to children who have abnormal TCDs.

Complications of sickle cell disease can be avoided by preventing red blood cells from becoming sickle-shaped. Ways to help sickle cells stay round include:

One of the best things you can do to prevent sickle cell symptoms is to stay hydrated by drinking water.

Hydroxyurea is a medication that can help many sickle cell patients. It does not cure sickle cell disease, but it can improve many symptoms, by: 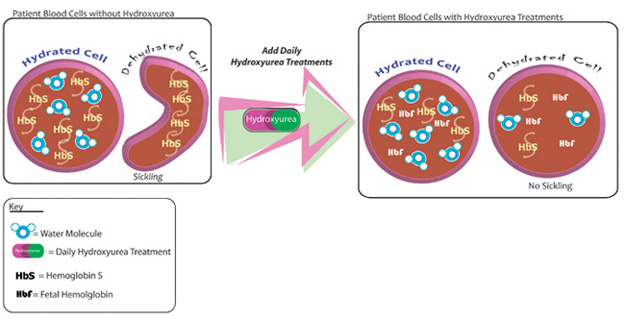 Hydroxyurea is a safe drug, but the dose for each patient must be carefully adjusted. Too small a dose will not have the desired effect; too large a dose will cause all blood cell counts to drop, even the good cells. Therefore, its use must be monitored by frequent blood counts in the clinic.

Hydroxyurea is usually prescribed for patients with frequent pain episodes, very low red blood cell count, acute chest syndrome, or other sickle cell problems. It is not known yet whether hydroxyurea can prevent strokes.

What Is Sickle Cell Trait?

Can Sickle Cell Anemia Be Cured?

To learn more about bone marrow transplantation for sickle cell anemia, please contact a member of the Sickle Cell Anemia and Hemoglobinopathy Program or the Stem Cell Transplant Program.