I felt like I was a skinny person trapped in a fat body. I was always thin as a child. When I was in the military, during my Iraq deployment in 2003-04, I started gaining weight after a health issue, and I couldn't get it off. Clothes weren't fitting anymore. I was tired all the time. I got to where I didn't want to dress up or put on makeup. I didn't care what I looked like.

I was disgusted with myself and I got depressed. Then, gastric bypass surgery changed my life. I lost more than 100 pounds. I'm more confident now. I'm not down on myself. I'm not embarrassed. I'm happier with the way I look. I don't feel trapped in my body anymore. 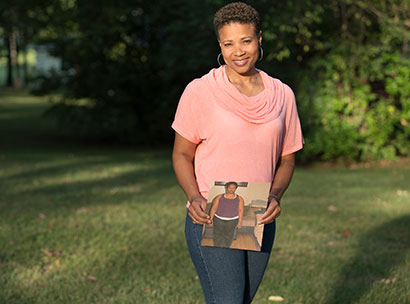 Being overweight limited a lot of things. I could barely walk from my back door to the mailbox without being out of breath. In my photography business, anything I did outdoors became increasingly difficult, especially if there was a lot of walking.

Later, my cousin told me his wife had the surgery and said it was the best thing to ever happen to her. So, I decided to do it this time. My doctor referred me to Vanderbilt.

This time, my 17-year-old son didn't want me to have the surgery. He was an athlete, and he thought I could lose the weight on my own.

I sat him down and told him, "Do you see my struggle? The diet pills. The diets. I've done all that. This surgery is not only for me. It's for you and any children you might have some day."

I felt secure in choosing Vanderbilt for my surgery. After talking to my surgeon and other center professionals, I thought, "This is where I need to be. These are the people who are going to help me through this."

I remember my doctor saying, "This is just a tool. It's not a miracle cure." Once he drilled that into me, it prompted me to want the surgery even more.

It's sometimes hard to believe that I'm a size 6 now. There are times I still feel like that fat girl. That's how I was conditioned to think. I'll go to the store and grab a bigger size, and my husband will say, "That's too big for you."

Some people refuse to tell other people theyve had weight loss surgery. They're embarrassed or too private, and I think that's just crazy. I want to educate people who say, I'm hopeless. I could never do that.