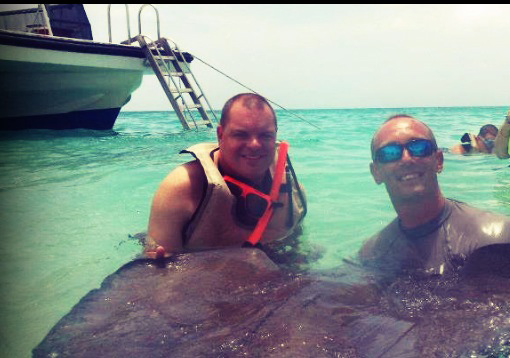 Six months after his surgery, Tommy Schroader was in the crystal blue waters off Grand Cayman Island petting a giant stingray.

Lifelong epilepsy and the risk of seizures had kept him from adventures like this, but after a successful epilepsy surgery at Vanderbilt University Medical Center, he was celebrating being seizure-free.

His wife Miranda was with him on the celebratory Caribbean cruise and says they are amazed at how much life has changed since surgery. “To see how much it improved our life, the benefits definitely outweigh the risks. We were expecting it would be a good outcome, but never thought it would be this much of a life changer.”

An elementary school physical education teacher, Tommy, 40, was constantly worried about getting enough rest and staying relaxed because tiredness or stress would make his seizures more frequent. He had to avoid any activity that would be dangerous during a seizure, like being near water.

Tommy had his first seizure at 18 months old, and says he had tried nearly every available medication to help control his seizures. “I’m always aware a seizure is coming on. I can’t talk, I feel dizzy, my head turns side to side,” he said. Tommy‘s neurologist referred him to Vanderbilt for surgical evaluation.

In Tommy’s case, his seizures originated in a single area that is relatively common, the hippocampus. He underwent a selective amygdalohippocampectomy procedure to remove just the hippocampus, tissue about half the size of the pinky finger, using a small incision and microinstruments.

After a four-hour surgery and three days in the hospital, Tommy was home in time for Christmas. Six months later, he was swimming with the stingrays. Overall, Tommy has now been free of seizures for more than five years since his surgery.

Now the Schroaders are in the process of adopting a child. “That was one of the main reasons to go for it,” Tommy said, “to be the best husband and dad I can be without epilepsy hanging over my head.”