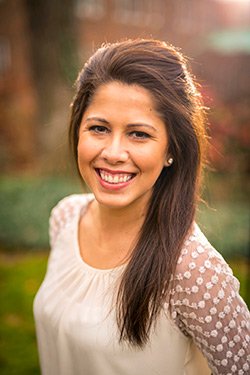 That's not remarkable for most people her age.

But Osborn grew up with cystic fibrosis (CF), a genetic disorder that clogs the lungs with mucus and makes breathing difficult. She was diagnosed at 6 weeks old, after being tested very early because her two older siblings also have the disease.

For years, Osborn stayed active despite CF, no small feat. During her time on the cross country team, for example, she only had 40 percent of normal lung function.

But the environment proved hazardous. Osborn got a bacterial infection from mycobacterium avium, a germ she likely picked up in the wooded areas where she often ran.

The infection was a harbinger of challenges to come. Because Osborn's lungs were already compromised, fighting off mycobacterium avium required a year of antibiotics. Then she contracted a staph infection, and another from Aspergillus, a mold whose spores don't bother most people, but can easily sicken someone with CF. Osborn began another year of medications to recover, and had to quit running.

From that point, Osborn endured nine years of worsening health due to chronic infections. She took constant antibiotics, but eventually they stopped working. She missed a lot of school, and kept up her studies at home. She joined a dance group but couldn't always practice with the team. She had to learn the choreography by video.

Osborn's brother had attended Vanderbilt's medical school and urged her to see doctors there. In 2012, they approved her for a lung transplant. But at the time, she felt relatively healthy -- or perhaps overconfident.

Doctors told her that a newly transplanted lung lasts an average of five years and most people do not get a second transplant. Osborn was rattled by the idea of starting what might be only a five-year clock too early. On the other hand, she told her fiancé she wanted the transplant before they got married. The idea of the transplant was, as she put it, a lot to take in, and she wanted to be 100 percent sure she wanted it before committing to the surgery. With mixed emotions, she postponed the procedure.

But by late 2013, Osborn's lung function was down to 26 percent. She came to accept that it was time for the double transplant. In December of that year, both her lungs were surgically removed and replaced with two new donated lungs. Drs. Eric Lambright and Eric Grogan performed the surgery at Vanderbilt.

The usual hospital stay is 10 to 21 days, but Osborn did so well, she was able to leave the hospital six days after the procedure and begin her follow-up therapy. During the year following her surgery, she experienced symptoms of organ rejection, 80 percent of lung transplant patients do, but they were easily resolved.

Before surgery, walking even short distances was difficult. Osborn lived with her parents. Coughing disrupted her sleep, so she wouldn't get up until late morning. She needed help with daily breathing treatments, which took hours. So, Osborn rarely left the house before 3 p.m., a schedule that hindered schoolwork and her ability to hold a job.

One of the biggest things I appreciate from the transplant is being able to roll out of bed, throw on clothes and leave the house, Osborn said, a year after surgery.

Her lung function reached 94 percent. She had moved out of her parents home and was working as a real estate agent.

CF won't invade her new lungs. Donated lungs come from people without CF, and the lungs can't catch it, although the disease can affect other organs. (Osborn has it in her pancreas.)

Osborn's future is not entirely certain. But 12 months after her transplant she was thriving and making plans. She and her fiancé are preparing for a May 2015 wedding, and hope to adopt a child. My goals in life, Osborn said, are just to have a happy, blessed life.