It was November of 2011, and Kristi and her husband had been married for a year. They packed the car and headed south for Gulf Shores to breathe the fresh air and talk about their dreams for the rest of their lives.

The Gulf of Mexico beckoned, so one day they took to the beach for a walk. Step by step, Kristi found it harder to walk. They hadn't walked half a mile before she broke down. Her 331 pounds were just too much. 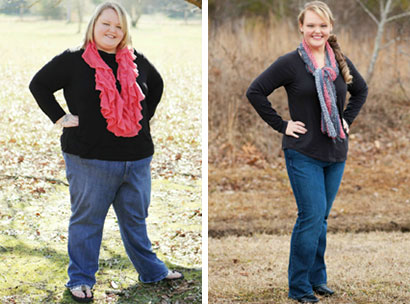 "We had a long talk," Kristi said. "We had been married for a year and wanted to have kids, but there was no way I was going to be able to carry a child at 331 pounds. We didn't want that at all."

Kristi is an amateur photographer in her spare time. Not long after that trip, she was photographing a wedding and ran into a friend's mother who had been a surgical weight loss patient at Vanderbilt. "The woman raved about her surgeon," Kristi said. So the next week, she called Vanderbilt for an appointment.

In many cases, new patients can go through the approval process and schedule surgery within a month or two, but Kristi had to wait 18 months in order to get coverage on her husbands health insurance plan. It drove me crazy, but looking back on it, it really prepared me for the life change I had to go through, she said.

While she waited, she met with several specialists in the clinic to discuss lifestyle changes, surgery options and whatever else was on her mind. "My husband and I had a lot of questions and the Vanderbilt team answered all of them," she said. "It makes you feel comfortable being at Vanderbilt. They know what they're doing; they're experienced."

It takes about two-and-a-half hours to drive from Dutton, Ala., to Vanderbilt, but for Kristi, the trip was worth it.

"This was a pretty big procedure; I had never had surgery in my life before this," she said. "I wanted to go somewhere that would take care of me, so that's why I chose Vanderbilt and was willing to drive. Vanderbilt is just a step above everybody else, even in the waiting facilities and information services. The staff and doctors are just more than you could ask for."

Her wait ended in February 2013. Kristi's sleeve gastrectomy took less than three hours, and she says her family appreciated getting updates every 20 minutes about how she was doing as they waited.

"I couldn't have asked for it to have been better," she said. "There was not one hiccup."

Her surgery was on a Wednesday, and by Saturday, she was back home walking the acreage behind her house. She noticed something funny: Her legs didn't hurt.

The next Monday she was back to work, and her new life was in full swing. That summer, she discovered the exercise program CrossFit, and has since lost about 80 pounds.

"My goal through this entire process was to just be healthy," she said. "I don't want to be skinny. I didn't want to lose much muscle. My key to it is the exercise. You can eat right all day long, but unless youre doing something that gets you off the couch each day, you won't succeed in being healthy."

Now, Kristi can keep up with her husband on hikes and bike rides, and she has more energy to get up early on Saturdays to pursue her photography hobby. She's a long way from that walk on the beach back in Gulf Shores.

"It is the biggest favor you will ever do for yourself," she says of her surgery. "Words can't describe how my life has done a 180 in just two years."